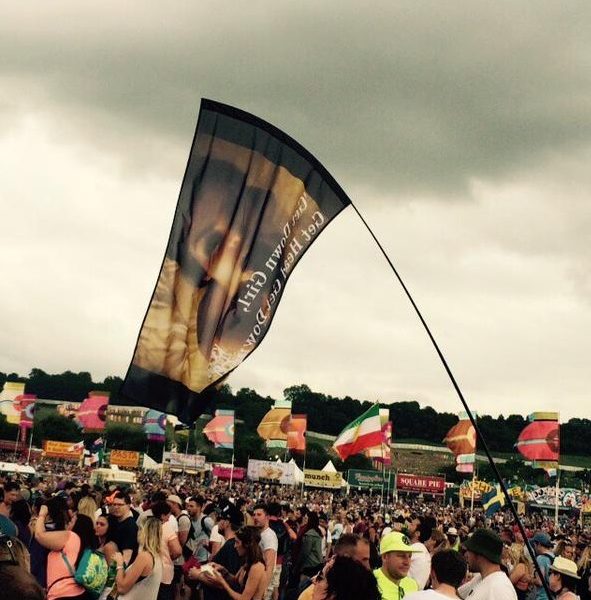 The Glastonbury show this year was quite eventful as one of the show-goers decided to turn up with a huge banner with an explicit still image, of Kim Kardashian and ex-lover Ray J, embedded on it. The flag explicitly showed Kim Kardashian performing oral sex on Ray J, a clip that was obtained from a sex tape that was leaked online in 2007. Despite an overwhelming number of petitions raised by festival goers to have Kanye West replaced with a rock band, the “All of the Lights” hit-maker still put on a show at the annual event.

The stunt might have been sparked by the unattended pleas of the majority of the show-goers to have Kanye West scrapped from the lineup of performing artists at the Worthy Farm event. As if aware of the numbers against his performance, Kanye went ahead to proclaim that he was the greatest rock artist alive. 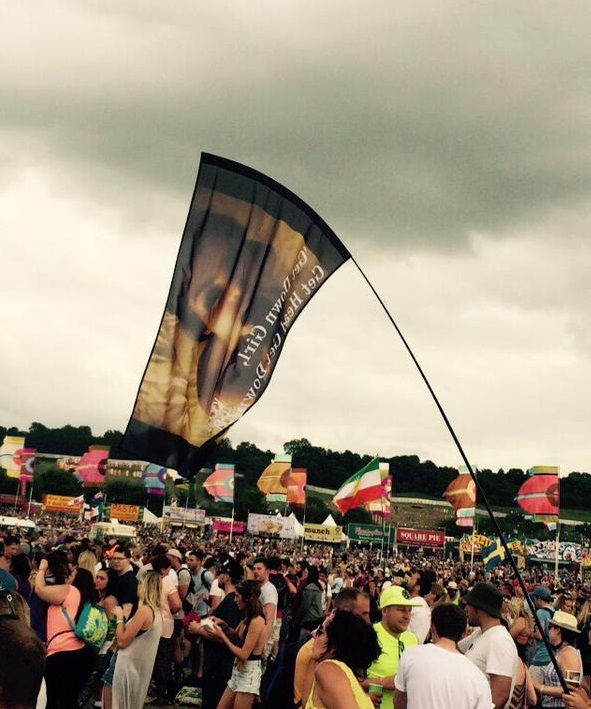 Kim seemed not to be bothered by the waving of the flag which depicted the video that propelled her to fame back in 2007. From the pictures taken at the show, she appeared to be very impressed by the show that her husband put on stage. Ironically, the banner had embedded lyrics from West’s 2005 hit song “Gold Digger” which read, “Get down girl, go head get down.” Kim and Ray J were dating in 2004, the year that they made the highly publicized sex tape after which they broke up. In 2013, however, Ray J released the single “I Hit it First” insinuating that he was the first one to have sex with Kim after she started dating rapper Kanye West. Despite denying that he was trying to stint at Kanye, Ray J had a line in the lyrics that went “But now baby chose to go West”.

The singer profited heavily from the release of the single which gathered over 9 million views on YouTube alone.During West’s performance on the Pyramid stage, the show-goer continued to wave the flag which attracted a lot of media attention with images of the flag in the show going viral on various social media platforms.

Some of the fans on Twitter seemed rather amused by the pictures from the Glastonbury show with some terming it as”best flag I’ve ever seen”. Some were particularly infuriated by the level of indecency portrayed by the show-goer describing it as “misogynistic” and “repugnant”.

It is, however, unclear whether Kim Kardashian got a glimpse of the nasty flag  especially now that she is scheduled to give a speech on the  objectification of women in Paramount Theatre, Oakland, California. Interestingly, she even went ahead to post pictures of her 38-year old husband performing at the event where she couldn’t help but express how proud she was of his “electric performance”.

This was not the only hurdle that Kanye faced during his headline performance as comedian Simon Brodkin, stage name Lee Nelson unexpectedly interrupted his show before a security guard whisked him away from the stage. From Brodkin’s tweet that read, “I Kanye’d Kanye. That was for you @taylorswift13 #Leezus”, he clearly indicated that it was a revenge stunt against Kanye for interrupting Taylor Swift’s acceptance dialogue in the 2009 VMA awards.