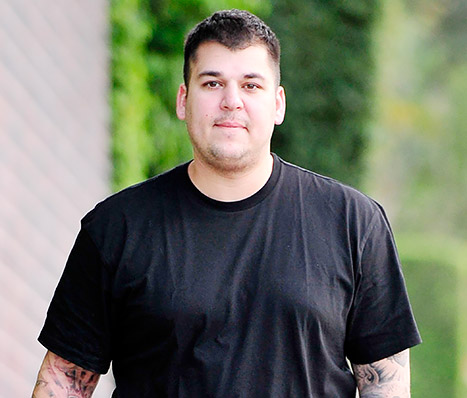 Here comes trouble for Rob Kardashian! Rob who is currently living with Khloe Kardashian, is said to be under depression for almost a year now and he is spiraling out of control. He constantly locks himself up in his room and rarely leaves the house. It is also reported that Rob has been piling on weight and he’s feeling very bitter about himself and that is why he has cut himself off from his family. Khloe who sneaked into his room, was shocked to find plenty of old food and some pills. The Kardashians are really worried about Rob but all of them are not reacting in the same way. While Kris Jenner maintains a soft spot for her son, Kim and Kourtney want Khloe to kick Rob out of her house so that he will start standing on his own feet and stop using his sister as a constant crutch. On top of that, Kim has also asked Khloe to shut down Rob’s bank account as she feels it fuels his current situation. Khloe has been supporting Rob for sometime now and although she’s not okay with kicking Rob out, Khloe agrees with her sister Kim to cut of Rob’s access to his money.Mom Kris Jenner on the other hand wants the family to stage an intervention to help her son but Rob is refusing to accept any help offered to him. Kris who fears her son might die if he’s been left out like this also suggested hiring a professional team to help out Rob but Khloe feels that he might feel ambushed by that since the family itself rarely visits him.

Rob’s family members are still breaking their heads on how to save him from the devastating situation he is in and one can only hope they come up with a solution soon!