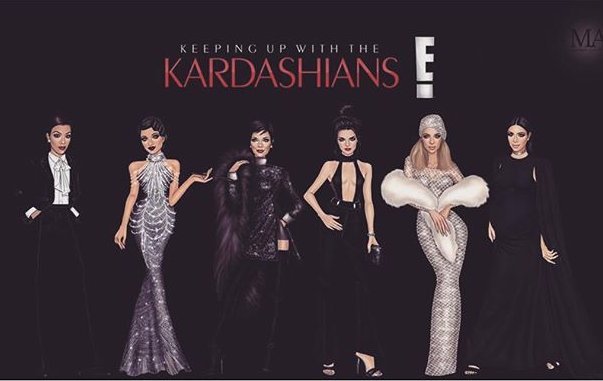 If you’re a huge Kardashian-Jenner fan you already know that the Season 11 Premiere of Keeping Up With The Kardashians aired last night and boy did it have a lot of drama going on! Although we are not really surprised because this family is known to always have a little drama sprinkled in their everyday life!

First let’s start with the Jenner sister drama. Kylie and Kendall are very close in age and are the youngest siblings on the show so of course they are going to battle once in awhile. While at St. Barths for their annual family trip, Kydizzle decides to invite her boyfriend Tyga. Kendall gets super annoyed and says “really looking forward to this trip to hang out with you.” – hinting that she wasn’t pleased that the rapper was invited.

Kenny and Kylie end of having a dumb feud about a dress Kylie wouldn’t let her sis borrow. Later after that fight settles, Caitlyn Jenner asks Kendall in a worried matter what’s the “deal” with the Kylie and Kendall responds immediately saying that “She doesn’t have her priorities straight and I tell everyone that.” – Ouch! I guess the sisters are having a hard time getting along lately.

The main drama on the show is once again Kourtney and Scott’s dying relationship. Unfortunately, this couple can never seem to get it together! They are constantly battling and Scott is continuously fucking shit up by flirting with other girls and his drinking problem. You can tell that poor Kourtney is getting absolutely exhausted by his behavior and so is the rest of the Kardashian click. Kim and Kris have a gentle conversation with her about the issue and Kourtney says: “Let’s look at the bright side. Now I have a huge closet guys”.

Later in the show Khloe and Kris take Kourtney out for some drinks and Corey Gamble (Kris Jenner’s new lover) was there too. He even proceeded to give the lovely Kourtney some advice and letting her know that he has some basketball players he can hook her up with. Kourtney said she is not ready to date and is going to focus on her children because that is the most important thing in her life, obviously.

Although Kourtney is going through a rough time, the mom of 3 has been also busy doing some modeling herself. She ends up stripping down for Brian Bowen Smith’s Metallic LIfe series and looks very seductive in the shoot. The girl definitely has a hot body! Even in the summer vacation trip she took with her family, Kourtney gets hit on by a stranger and leaves Kendall saying “I just don’t think Kourtney realizes how bomb she is right now”. Well, we hope Kourtney starts feeling better soon and leaves Scotty boy behind!